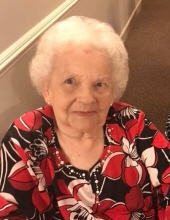 This obituary is being shared as a courtesy to our long-time friend & fellow funeral director, Ken Caulder of Leavitt Funeral Home, Wadesboro, NC. The Miller-Rivers-Caulder Family extends our love, sympathy, and prayers to Ken and his family on the homegoing of his beloved mother. All online condolences posted here will be forwarded to the family.

WADESBORO – On Friday, April 3, 2020 in the early hours of the morning, Mrs. Virginia Jones Baker, 83, woke her sons and while holding her hands, they gently let her know they were with her and that everything was okay. Just a few moments later she peacefully took her last breath on earth and breathed her first in Heaven.

Virginia May Jones was born May 19, 1936, in Richmond County, NC, a daughter of the late Bernie Jones and the late Janie Leviner Jones. She was a 1956 graduate of Laurel Hill High School.

She was first married to Bobby Glenn Caulder of Rockingham and they were blessed with two sons. She worked a number of years in the office of the Pepsi Cola Bottling Plant in Rockingham and later at Sandhurst Hosiery in Quality Control, retiring from Hanes Brands with 30 years of service.

A former member of the Church of God of Prophecy in Rockingham, Virginia served as a Sunday School Teacher, Vacation Bible School Director, Prayer Band Leader, and sang in the choir.

In September of 1991, she married Leon Baker and immediately her family grew by 3 children and 4 grandchildren. She and Leon enjoyed spending time at their second home in Holden Beach and also visiting with Leon’s brother and his family in Florida. They shared many happy and wonderful times together. Together, they attended Jesus First Free Will Baptist Church for a number of years before the church closed.

Later, Virginia enjoyed a second relationship with the Church of God of Prophecy and renewed many old friendships there – special friends that were near and dear to her heart.

Virginia became a faithful Sunday evening worshiper with First United Methodist Church, Rockingham through their cable television ministry. This came at a time when she was physically unable to get around but the televised services kept her feeling connected to the church.

Four years ago, due to health circumstances, Virginia came to live with her son, Ken, in Wadesboro. Ken and Glenn’s church family from First Baptist Church, Wadesboro soon “adopted” Virginia and offered a welcome and needed support system – a wonderful example of God's love in Christian service to others.

Survivors include: her husband of 28 years, Leon Baker; her sons, Glenn Caulder and Ken Caulder both of Wadesboro; three granddaughters, Amy Tucker and husband, Mac, Traci Morrison and husband, Mike and Lauren Griggs and her companion, Nick, all of Hamlet; eight great-grandchildren, Caleb Neeley, US Army National Guard, Stationed in the Middle East, Cameron Neeley, Alden Morrison, Brayden Morrison, Kyleigh Morrison, Kelby Morrison, Aniston Griggs and Nicholas Griggs, all of Hamlet; one sister, Evelyn Burrell of Laurinburg; a niece and a nephew, Jane Patterson and husband, Don of Laurinburg and Ronnie Clark and wife, Tara of Elizabeth City; her great-nieces, Margot Clark of Greenville and Katlyn Cockrell and husband, Aaron of Angier; and a beloved grand-dog, Emma, whom Virginia spoiled and caused to gain more than a few unnecessary pounds.

Virginia is also survived by a cousin, who was more like a sister, Brenda Peele and husband, Robert of Laurel Hill; her brother-in-law, Larry Caulder of Ellerbe and his family; her sister-in-law, Rose Baker from Laurinburg and Glenn and Ken's “other mother” Linda Caulder of Rockingham.

In addition to her parents, she was preceded in death by her children, Debbie Griggs, Jeff Baker and Mike Baker.

Virginia's family could not have cared for her so wonderfully if it were not for her caregivers who are more like family; Lyra Johnson, Lindsay Haire, Sue Boyer, Deitra Warwick and Frances Townsend, as well as, former caregivers, Nay Nay Borden, Brittany Spencer and Susie Curtiss. Others lovingly involved in her care include neighbor, Cathy McLaurin and friend, Charlotte Treadaway.

Virginia was an inspiration to those she came in contact with. Those who cared for her honored her daily and lovingly referred to her as “The Queen,” “Grandma Baker,” “My Angel,” “Momma,” and simply “Miss Baker.” These care providers meant so much to her and lovingly looked after her just as if she was their own Mother or Grandmother.

In addition to her care givers, the family would like to express sincere gratitude to Kelly Dutton Horne, FNP and the staff at Carolinas Primary Care; and the physicians and staff at Atrium Health Anson for the times they cared for her and treated her like royalty.

The family also offers praise and thanksgiving for the staff of Healthy at Home – Union Home Care for their services for the times spent in her home and to our family at Ambassador Health and Rehab for the times she was a resident in their care for rehabilitation and physical therapy following hospital stays. And more recently, we owe a debt of gratitude to Anson Community Hospice, a division of Richmond County Hospice, for helping her and our family walk through the final weeks of life with comfort, compassion and dignity. At the time of her leaving, they offered the assurance that we were doing all we could for her.

Virginia is lying in repose at the home of her son, Ken. Friends and family are welcome to drop by to pay their respects any time during this week.

The family will hold a private service on Holy Saturday, April 11, 2020 in the Chapel of Leavitt Funeral Home. The family is also planning a Celebration of Life service for a date to be announced later.

"All that I am, or hope to be, I owe to my angel mother" - Abraham Lincoln

To order memorial trees or send flowers to the family in memory of Virginia Jones Baker, please visit our flower store.
Send a Sympathy Card