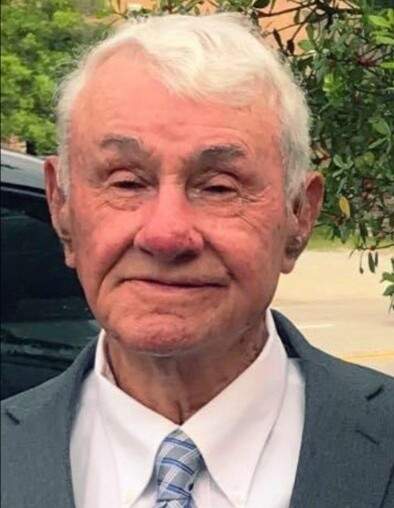 Mr. Perry (Bo) Laney Mungo entered into rest Sunday, April 24, 2022.   He was the son of the late Perry F. and Lois Funderburk Mungo. Bo was a faithful member of the Friendship Sunday School Class at Pageland First Baptist Church.  The second generation of the family construction company, P.F. & Perry L. Mungo, Inc., Bo’s influence can be seen in residential, commercial and instructional structures throughout South and North Carolina and Georgia. Bo took great pride passing his trade to his sons, the third generation of Mungo builders.

A multi-sport athlete at Pageland High School, Bo loved baseball most.  His high school football career was highlighted by selection to play in the 1954 Annual Pee Dee Tobacco Bowl Gridiron Classic in Florence, SC.  Bo attended NC State, studying engineering.  Bo’s most coveted prize came when he won the heart of the beautiful brown-eyed 1961 “Miss Pageland Tiger”, Frances Hinson.  Together, Frances and Bo grew the construction company, while growing their family.  Their three children, grandchildren and great grandchildren were their pride and joy.

In addition to being a devoted husband, father and “Papa Bo”, Bo was an avid golfer, sinking his first hole-in-one in 1974 at White Plains Country Club. Bo enjoyed the golf, but loved the shenanigans of his golfing buddies.  “Breakfast Club” with close friends and Friday nights at “The Barn” with family and friends were Bo’s favorites.

A Graveside Celebration of Life Service will be held on Wednesday, April 27, 2022 at 11:00 am in the Pageland First Baptist Church cemetery with Dr. Joel Dale and Brent Taylor officiating. The interment will follow in the church cemetery. The service will be streamed live on the Miller Rivers Caulder Funeral Home Facebook page. The family will greet friends in the Church Fellowship Hall following the Service. Memorials can be made to the charity or church of one’s choice.

To order memorial trees or send flowers to the family in memory of Perry (Bo) Laney Mungo, please visit our flower store.