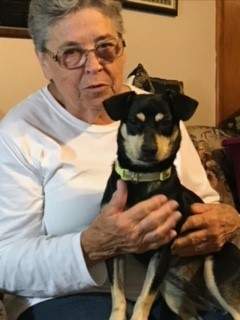 Mrs. Mary Glynn Davis Johns, age 80, entered into rest on Sunday, March 13, 2022 at her home with her family by her side. Funeral services will be 4:00 PM Tuesday, March 15, 2022 from the Chapel of Miller-Rivers-Caulder Funeral Home by Brent Taylor with burial to follow in the Zoar United Methodist Church Cemetery. The family will greet friends from 3:00 – 4:00 PM Tuesday, prior to the service at the funeral home.

*** All members present of the Chesterfield Rescue Squad and Teals Mill Volunteer Fire Department are asked to serve as honorary pallbearers.

Due to COVID-19 regulations, our staff is committed to taking care of our guests and families that we serve. We also ask all guests and family members attending visitations and services to please continue social distancing and if desired to bring and wear a mask.

Mrs. Johns was born July 6, 1941 in Chesterfield, SC a daughter of the late James Frank “Jim” and Mae Teal Davis. She attended Zoar and Chesterfield schools and was a former employee of Chesterfield Webbing. In 1982, she and her late husband, Louis Johns opened the Freeze King Restaurant, where she worked side by side with her daughter until her retirement in 2016. She was best known for her fried chicken and chocolate layer cakes. She received the award for best fried chicken in Chesterfield County numerous times.

Mrs. Johns was known to law enforcement, Chesterfield Rescue, and Teals Mill VFD as “Grandma.” Although she was never an official member of the rescue squad or fire department, she worked tirelessly behind the scenes. She was a devoted mother, grandmother, and great grandmother. Mary and Louis were very involved in their grandson’s life.

The family would like to offer a special thank you to the staff of Kindred Home Health and Regency SouthernCare Hospice of Chesterfield for their excellent service.

To order memorial trees or send flowers to the family in memory of Mary Glynn Johns, please visit our flower store.