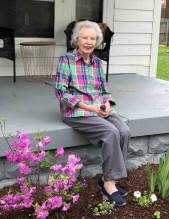 The following obituary is being posted as a courtesy to Mrs. Louise's family locally in the White Oak community. On behalf of the Miller-Rivers-Caulder Family, we extend our love and sympathies to her family. All online condolences will be forwarded to the family. "Precious in the sight of the Lord, is the death of His saints."

L. Louise Allen passed away peacefully May 10, 2021. She was an amazing woman.

On August 31, 1925 Lena Louise was born in Ruby, South Carolina to Nathaniel and Lena Ratliff. She was the 10th of 12 children and grew up in a 1700’s farmhouse with no indoor plumbing or electricity. Each day she walked to school and picked cotton afterwards with her siblings to help support her family. Each sibling had a nail to hold the few outfits they owned. She was quiet and shy, and she’d often say her sister would do the talking for her. She developed her relationship with Jesus at White Oak Church in Ruby and most recently visited there on Sunday April 18th, 2021. She was proud of her southern heritage. Her grandfathers and several family members served in the Civil War. She is the last of her family to go to her heavenly home and we rejoice knowing they are complete again.

Louise lost her mom when she was 17, so after high school graduation she moved to Columbia, SC to get a job. She was living in a women’s boarding house and it was then through mutual friends in the fall of 1943, she met Clifford “Bud” Allen. Bud was stationed at Fort Jackson in the Army. Though he had to pursue her for quite some time she finally agreed to a date. They married on February 4, 1944 in the courthouse. 10 days later he was shipped overseas to serve in WW2. Louise came by train to Indianapolis and arrived at Union Station wearing a purple hat to meet her new father-in-law. For many years, Louise loved to tell the story of her purple hat and has kept it all this time. Her mother-in-law put her to work dusting and polishing woodwork in their home on Parkway Avenue - quite the change of scenery from her Carolina roots. We marvel at her bravery. She lived with Bud’s family for 2 years until he was shipped home. While he was overseas, she went to work for State Auto in downtown Indianapolis and was employed there for 6.5 years.

In January of 1950, they moved into their forever home in Garfield Park. She’d often say she had never been happier in her life, as she was newly pregnant and finally moving into a home of their own.

Bud and Louise had two children, Clifford Jr. “Buddy” and Bonnie Louise. Bud was a body and fender teacher for Arsenal Tech High School and Louise a homemaker. She worked hard to care for her family. She was an excellent cook, seamstress, and kept a very clean home. She worked for Blocks Department Store while her kids were at school, but always home to meet them at the bus stop.

Louise and Bud enjoyed many years of card club, church fellowship, trips in their camper, and riding their motorcycles. In 1979, they became grandparents and treasured this role. Even after Bud’s death in 1991, she was entirely devoted to her children and grandchildren.

Louise was a member of Pleasant Run UCC for over 50 years. There were few Sunday mornings that she wasn’t in attendance. To those who knew and loved her, she was “Meme”. She was a lady till her very end, always with her hair fixed and her fingernails painted. We are celebrating her life, knowing she is seeing the face of Jesus and holding Bud’s hand again.

She is survived by her children, Clifford (Lek) Allen, Bonnie (Mark) Stansbury, her grandchildren and great grandchildren.

In lieu of flowers, memorial contributions may be made to Pleasant Run United Church of Christ, 59 E. Pleasant Run Parkway South Drive, Indianapolis, IN 46225

In an effort to keep everyone safe and healthy, we are adhering to all the governor’s mandates. We encourage you to share your condolences, photographs and memories with the family.

To order memorial trees or send flowers to the family in memory of L. Louise Allen, please visit our flower store.