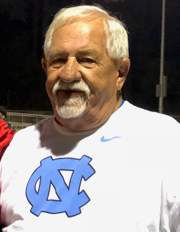 Mr. John W. McCormick, age 75, entered into rest on Wednesday, November 20, 2019 at his home. Funeral services will be 2:00 PM Saturday, November 23, 2019 at Anointed WORD Ministries by Pastor Donnie Driggers and Rev. Glenn Gulledge with burial to follow in the Chatham Hill Memorial Gardens. The family will receive friends from 6:00 - 8:00 PM Friday, November 22, 2019 at Miller-Rivers-Caulder Funeral Home and other times at the home of Todd & Beverly McCormick.

Mr. McCormick was born December 5, 1943 in Ellerbe, NC a son of the late John William and Laura Jane McCormick. He was a retired employee of Cheraw Yarn Mill with over 33 years of service. John was the owner and operator of McCormick’s Fencing, and was also associated with McCormick’s Grocery & Grill. Mr. McCormick was an avid North Carolina Tar Heels fan and also pulled for the Washington Redskins. His hobbies included working, duck hunting, and fishing. He also enjoyed playing and coaching softball. John was a true people person who never met a stranger.

Memorials may be made to Anointed WORD Ministries, 550 Sandpiper Circle, Cheraw, SC 29520.

To order memorial trees or send flowers to the family in memory of John W. McCormick, please visit our flower store.