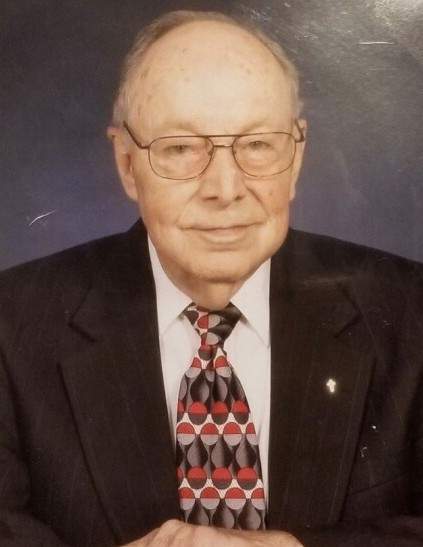 Mr. Jessie Wilson Smith, age 95, entered into rest on Saturday, October 17, 2020 at his home. Funeral services will be 1:00 PM Saturday, October 24, 2020 at Pine Grove Baptist Church by Rev. Jackie Hinson and Rev. Don Rhyne with burial to follow in the church cemetery with military honors. The family will greet friends from 5:00 – 7:00 PM Friday, October 23, 2020 at Miller-Rivers-Caulder Funeral Home.

Mr. Smith was born August 7, 1925 in Ruby, SC a son of the late Elijah “Bud” and Ella Moore Smith. He was a U.S. Navy veteran of World War II and a retired employee of Sacony Industries. Jessie was a faithful member of Pine Grove Baptist Church since 1947, and was very active in the Baptist Men’s Group of the church. He was also faithful in his support of both local and foreign missions, and served in numerous other capacities and positions in the church through the years.

Mr. Smith was a true family man, who enjoyed spending time with his grandchildren and great grandchildren. He also enjoyed spending time outdoors fishing and gardening, and was known for his hundreds of jars of homemade pickles he would make each year to give away. His love was also very evident toward his beloved and slightly spoiled feline companion of over 10 years, “Harley.”

In addition to his parents, Mr. Smith was also preceded in death by his beloved wife, Ruby Griggs Smith; son, Ronald W. Smith; and mother-in-law whom he loved and cared for many years, Ola P. Morse; and 14 of his siblings.

The family would like to express a special Thank You to the staff of Regency SouthernCare Hospice of Chesterfield, and treasured neighbors that have become family, Margie Nell Jacobs, Eddie & Bonnie Truesdale, and Bradley & Faye Eddins for their love, care, and support shown to Mr. Jessie and his family.

In lieu of flowers, memorials may be made to one of the following charities that was very special to Mr. Smith, St. Jude Children’s Research Hospital, 501 St. Jude Place, Memphis, TN 38105 (www.stjude.org) or Gideon’s International, P.O. Box 184, Cheraw, SC (www.gideons.org) or to the Hospice of Chesterfield County Foundation, P.O. Box 293, Chesterfield, SC 29709.

To order memorial trees or send flowers to the family in memory of Jessie Wilson Smith, please visit our flower store.