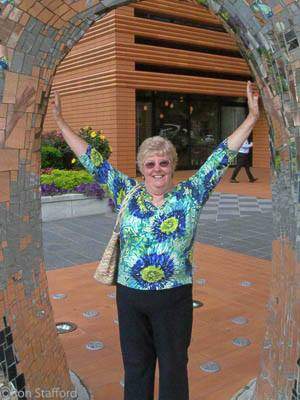 Jacqueline "Jacqui" Marze, 72, of Chesterfield, passed away Friday, August 28, 2020 at her home with her family by her side.

A funeral mass will be held on Wednesday, September 2, 2020 at 2 p.m. at St. Peter Catholic Church, 602 Market Street, Cheraw SC. The  family will hold a celebration of life in Jacqui’s memory at the home on Saturday, September 5, 2020.

Jacqui was born October 7, 1947 in Elizabeth, NJ to the late John “Jack” and Mary Mullen Menzie.

In 1968, Jacqui met and married her beloved husband, Francis “Frank” Marze in Lakehurst, NJ where he was stationed with the US Navy. During the course of her marriage, Jacqui travelled the world, living in Tiawan and Italy, as well as the United States. She had a passion for learning about different cultures and meeting new people. Following retirement, she and her husband moved to South Carolina to be closer to their children.

Jacqui had a spirited fun-loving nature, infectious laugh, and the uncanny ability to make friends everywhere she went.  She was funny, insightful, straight-forward, and known for providing comfort and and wisdom to those who were in need.  She was a lover of tea, books, flowers, family, and friends.

Jacqui was an active member of St. Peter Catholic Church in Cheraw, previously serving as church secretary and a member of the women’s club.

She was preceded in death by her parents; and her sisters Patricia Branscome and Mary Shannon.

She is survived by her beloved husband Frank Marze of the home; a daughter, Shannon McAuley and her husband James of Chesterfield; a son, Jason Marze of Cheraw; a sister, Susan Nenstiel of Pennsylvania; four grandchildren, Megan Sellers and husband Cody of Charleston, Ryan Justice of Chesterfield, Connor Marze of Cheraw, Kaitlin Brizendine of Virginia; a great grandson, Alexander Sellers of Charleston; a nephew and niece, Joseph Shannon and Kathleen Osiadacz of New Jersey; and “sisters of the heart” Betty Spivey of Chesterfield, Beverly Cook of Georgia, Sandra McBride of Jefferson, and Kathy Falco of New Jersey.

To order memorial trees or send flowers to the family in memory of Jacqueline "Jacqui" Marze, please visit our flower store.