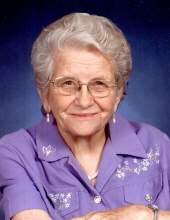 Hazel was born July 11, 1927 in Richmond County, NC and was a daughter of the late Sam Jones Carter and the late Ollie Virginia Covington Carter. Her family moved to McFarlan, NC and she was a graduate of Morven High School.

She worked for the Weller Division of Cooper Tools in Cheraw, SC, retiring with more than 20 years of service and was a member of Pine Grove Baptist Church in Chesterfield, SC.

In addition to her parents, she was preceded in death by her husband, W.M. Caulder; her daughters, Jackie Caulder and Teresa Caulder and her brothers and sisters, S.J. Carter, Virginia Brooks, Tilton Carter, and Audrey Threadgill.

Due to restrictions during the COVID 19 pandemic, funeral services will be private at Leavitt Funeral Home on Thursday with interment in Anson Memorial Park both in Wadesboro, NC.

Hazel’s family will always be grateful for the loving manner in which the staff of Springhill Assisted Living in Pageland cared for her while she was a resident there and for the care given to her by Regency Hospice during her period of declining health and transition.

In lieu of flowers, memorials may be made to Regency SouthernCare Hospice – Chesterfield, 205 E Main St., Chesterfield, SC 29709.

To order memorial trees or send flowers to the family in memory of Hazel Carter Caulder, please visit our flower store.